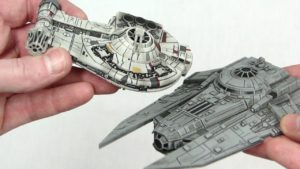 Field a 100 point list in this Standard event. We’ll begin with 3 rounds of swiss pairings (increased to 4 rounds if we exceed 18 players) after which we will cut to the top 4 players for 2 rounds of single elimination. The final round between the top 2 players will be untimed.

Participants will receive a double sided Luke Skywalker / Darth Vader promo card. Players in the top four will be given token packs consisting of three Stress tokens, three Ion tokens a Cloak token and a Tractor Beam token. The victor will walk away with a double sided Aurebesh Promo card offered at the 2016 Hoth Open series featuring the T-70 X-wing and Tie F/O. 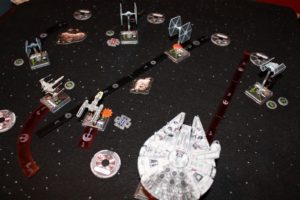 The Imperial Fleet has Ambushed a Rebel convoy! Join us for a fun game showcasing the kinds of non-competitive play X-Wing can offer. It’s going to be one big long game. No need to bring epic ships. We’ll set up the fleets, you just bring your fighters! Players will be divided into two teams, Imperial and Rebel. at the start of the build, players will elect a Fleet Commander for their team. The Fleet commander will assume control of the Epic fleet. all other players will outfit a 50 point list of single base fighters. During set up, ships will deploy within range 1 of friendly Epic ships. The first team to score 200 points will win the battle!

All weekend long, we will offer demos of this fast paced and easy to learn tabletop dogfighting game. I’ll have teams ready to go, so you can jump right in and see how the game works.